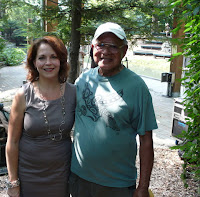 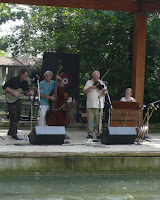 Tony Ellis and the Musicians of Braeburn on the Ohio Dept. of Natural Resources stage

Following the presentation, former OHF awardee Tony Ellis performed with his ensemble The Musicians of Braeburn. Ellis started his career with Bill Monroe’s Blue Grass Boys in the 1960s and his uniquely personal compositions for banjo and fiddle have earned him numerous honors. His music has been included in several Ken Burns documentaries, as well as on TV shows as diverse as Party of Five and Spongebob Squarepants. Somewhere in the midst of this long career, Ellis caught the ear of comedian and banjoman Steve Martin. Recently, Martin interviewed Ellis for the July 2011 of the The Banjo Newsletter. Follow the link to order a copy for $5 and read the interview. From their press release:

Steve Martin, who has garnered worldwide acclaim as a comedian, actor, writer, producer, and musician, recently added music journalist to his resume. Martin interviews banjo player and composer Tony Ellis in the July issue of The Banjo Newsletter. In a wide-ranging conversation, Martin queries the Ohio-based banjo player about his influences, and how his style has evolved from the early 1960s, when he spent more than two years on the road with the legendary Bill Monroe & his Blue Grass Boys. Martin also talks with Ellis about how his music has inspired Martin’s own banjo playing, particularly Martin’s composition “The Crow”, featured on his 2009 Grammy-winning album The Crow: New Songs for the Five-String Banjo.

Martin, who has long been a fan of Ellis’s music, says in the interview, “I came upon your music by accident, and I thought, ‘Wow, this is the kind of music I remember being introduced to when I first started playing in the 1960s.’ The way folk musician’s play; those individual styles. When I heard your song “The Wild Fox”, it just sounded great, and it made me fool around in double C tuning. I immediately wrote my tune “The Crow”—and
my new banjo career was off and running…”

Here, Steve Martin plays Tony Ellis’ composition “Father’s Pride” for Diane Keaton when she was honored at an event at the Kennedy Center:

Learn more about Tony Ellis in this segment from the PBS documentary program Our Ohio: